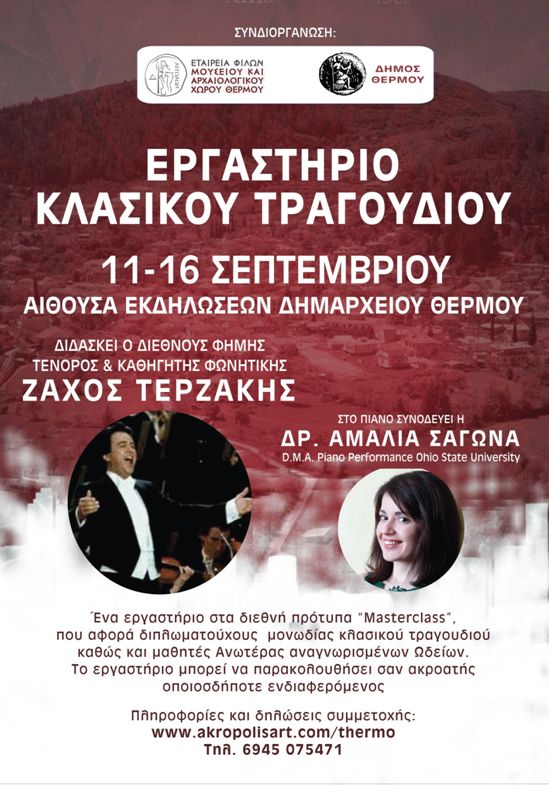 Highlighting the revival of the forsaken institution of “THERMIA,” the Association of Friends of the Thermon Archaeological Museum and Site organizes a series of cultural events in the Municipality of Thermo in September 2015.

The THERMIA festival was the leading institution of the Aetolian League taking place annually in Thermon and lasting for several days during the period of the autumnal equinox.

In ancient Thermon, which was the religious and administrative centre and locus of reverential pilgrimage of the Aetolian League, delegations of all the participating cities gathered annually. Throughout the duration of THERMIA, the delegates consulted and settled upon all major issues pertaining to the affairs of the Confederacy, electing its leaders, devising its future policy, performing religious ceremonies, while simultaneously attending great commercial, athletic, and other festivities.

We have also introduced to the occasion of the revival of Thermia a “Classical singing workshop,” a five-day music seminar (September 11th  – 16th), presented by the internationally renowned tenor Zachos Terzakis and accompanied by the piano soloist Dr. Amalia Sagona. The afore-mentioned workshop can be attended by teachers and students of Conservatories and Music Schools, musicians, choir singers, chanters, and all music lovers in general. The Association of Friends of the Thermon Archaeological Museum and Site has, for the very first time, organized this year—in collaboration with the Municipality of Thermo, as well as five local Cultural groups and Societies—the revival of THERMIA 2015 lasting from September 17th until September 20th. * The revival of the institution will be marked by a series of tours to archaeological sites, Byzantine monuments, natural wonders, athletic events, a PanHellenic bike race, performances of dancing groups, as well as a symposium and a concert in the festival hall of the Municipality of Thermo.

Zachos Terzakis, an internationally renowned tenor and opera director with a career of more than 2,000 outstanding performances, is a Professor of Vocal Performance and Opera Studies at the American College of Greece (DEREE), the ACROPOLIS Conservatory of Music and Arts Centre, as well as the Meizon and Panarmonio Conservatories. Workshop attendants will greatly benefit from his wealth of experiences accumulated during forty years of incessant international career.  During the courses, as well as in the final concert, participants will be accompanied by the pianist Dr. Amalia Sagona (PhD, Ohio State University, U.S.A.).

Workshop courses will commence on September 11 and be completed on September 16 in Thermo; a symbolic region of Greece owing its additional significance to its being the seat of the Aetolian League celebrated for its conception of the archetypal form of federal democracy in the world.

Workshop participants will also have the opportunity to participate in the final concert singing along with Mr. Terzakis in the Festival Hall of the Municipality of Thermo. They will also get the chance to discover the hidden historical and traditional treasures, as well as the incomparable natural beauty of the greater area. Relevant workshop Certificates of Attendance will also be awarded to all participants.

In accordance with international “Masterclass” standards, this workshop primarily concerns accomplished classical song soloists, as well as students of certified Conservatories. It may also be attended by any interested party including listeners.

You can find out more about which cookies we are using or switch them off in settings.

This website uses cookies so that we can provide you with the best user experience possible. Cookie information is stored in your browser and performs functions such as recognising you when you return to our website and helping our team to understand which sections of the website you find most interesting and useful.

Strictly Necessary Cookie should be enabled at all times so that we can save your preferences for cookie settings.

If you disable this cookie, we will not be able to save your preferences. This means that every time you visit this website you will need to enable or disable cookies again.